Once in a blue moon one has the sort of day that surprises the living daylights out of you and turns from a hum drum day into that special memorable moment. It is not planned, it is not expected but fate intervenes and it just happens. It is one of those magical days you will never forget.

I had such a day when unexpectedly. I was taken to Baden Baden for a walk!

The day had not started well. I was in Germany a country I had since my youth vowed never to visit. Living in London during and after the Second World War had put me off Germany for life. I lived daily with the damage the bombs had done but I was forced to visit as my daughter was competing in a gym competition in Karls Ruhr so I had to go.

The Gym Trip to see my daughter compete internationally in several European Countries and then travel on to Venice, Paris, London and LA should have been the trip of a lifetime but had turned into a nightmare for me. I had been promised in NZ that all arrangements had been made for me. I should travel as part of the NZ team and be treated as one of them. Unfortunately this was incorrect. Although my airfares had been booked as part of the team nothing else was, no hotels, and more importantly no passes to events. I had to beg my way around Europe. The official coach could not have been more unhelpful or nastier. I was not invited to any function, I just went anyway and but it made me feel that I was definitely not wanted on voyage.

It was the last day and Stephan, our designated host, had arranged a trip in a van so we could see some of the local scenery i.e. The Black Forest. Everyone was tired out and not enthusiastic I had had a particularly nasty night as I had been left out of 'a do' yet again Stephan I found irritating! When I had tried out my less than brilliant German he had gone into a long explanation about the ablative case. I mean I was only trying my German out! So all in all I was not a happy bunny.

But the trip had been arranged so I thought I ought to go. The start was not encouraging. The Black Forest is rather overrated to a native of New Zealand. All the fir trees looked ill thanks to the acid rain. A local beauty spot looked very poor beer in comparison to some of the NZ Lakes and the van was none too new. I wanted to go home!

We drove up a mountain and the van was parked in a field and we were told we had to walk down into Baden Baden where we would be met at the bottom. This I felt was THE last straw. I had my wrong shoes on and I did not want to walk anywhere. However the driver insisted I walked and refused to let me ride down with him.

He dumped us and drove off! It was the best thing that ever happened to me! I was left in the middle of a field of yellow daffodils as far as the eye could see. It was May and the country side when I really looked was awash with blossom of all colors The day was balmy and warm and the sky was blue flecked with white clouds. There was absolutely no noise but the hum of bees in the clover.

I took a deep breathe and realized I was standing in the opening shot of 'The Sound of Music'. As I reluctantly started the walk it suddenly dawned on me that perhaps this might be something out of the ordinary. It certainly was! This one walk is one I shall always remember. It was an' epiphany'. It took us about an hour to walk the path down to the Spa town of Baden Baden. Down and down we went , through the Alpine meadows into the valley where the town was situated. All the way were wonderful views to enjoy and every house was surrounded by bulbs and blossom. The scent was intoxicating. It was like walking through a Grimm's fairy-tale.

My mood changed. I began again to appreciate just how beautiful the world was. The warm day, the smell of the spring flowers, the wonderful feeling of the joy of life. Oh why isn't life always just like this moment. I wanted to find an excuse to stay like the hero of 'The Magic Mountain' by Thomas Mann who does. He thought he might have TB and stayed for seven years in his sanitarium in Davos only to rooted out by The Great War.

On the way we passed a romantic German Schloss with the grounds teaming with colorful tulips and cherry blossom. Snow White's castle! Down the old steps with iron gas lights that Stephan climbed up and lit. I used to watch the lamp lighters at home in London come with a long pole and light the gas and now Stephan was showing me how it was done.

At last we reached the attractive town square for coffee and kucken. I found to my surprise and delight that traditional Black Forest Gateau was actually white! Then we sauntered around the Spa, Baden Baden is an expensive spa resort but you can drink the healing waters for free. It tasted awful, like warm watered down vegetable stock but you cannot have everything. That unexpected walk made me feel good to be alive. I felt ecstatic. This alone was worth the journey from NZ and Stephan, annoying though he had been had given me a day I shall treasure. I never would have believed that anything could have been so glorious.

It was one of life's bonuses! Something unexpected and life changing. I knew I was privileged to be in Baden Baden I wanted to stay forever which of course I could not. If I had to chose one walk or even one perfect morning in my life this would be it. I shall never go back, a return visit may disappoint, return visits often do, but I did take a few photos and they give some idea but not the whole idea of the glories of Baden Baden. 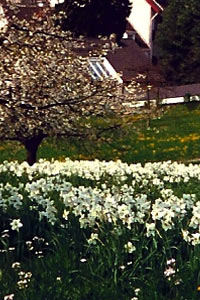 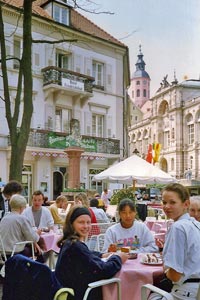