In 1924 the British Government held a huge International Exhibition at Wembley in North London celebrating all the best of the British Empire. Each colony was invited to exhibit and the Indian Government sent the Indian room created by the BomBay ( Mumbai) School of Art demonstrating all the best of Indian culture and traditions. It was breath taking, exoctic and strange to a Western eye.

The British Empire Exhibition was a huge success and ran daily for two years. The famous Wembley Stadium was built for the occasion.

Just imagine a huge wooden room with painted walls and ceiling completely inhabited by strange unknown Gods, elephants and monkeys that look down on you from above and painted exoctic flowers bloom in profusion.

Imagine being a little girl, bought up completely alone for five years with no father, no siblings to play with and no television. All you know of the world is your grandfather's house. a beautiful garden and this strange room. You have no idea who the people in the paintings are but they fascinate you. You spend hours in their company and begin to know and love them. They become your friends.

You would think I was making it up. This is the stuff of childish imagination and yet that little girl was me, then Janette Miller and now Janette Heffernan.

The Indian Room was made for the British Empire Exhibition of 1924. My grandfather, Henry Thorpe was the chief accountant. A self made man, 'Pop' was the son of a Manchester wagoner who rose from the lowest class imaginable to become the first graduate of the London School of Economics and governor of the Ceylon Railways. In those days 'Pop' made an unbelievable social leap upwards.

To save the Indian Room from destruction at the exhibition's end my grandfather, who loved everything Indian, bought it and had it attached to his large house in Taplow lock stock and barrel.

I was born to his youngest daughter in the middle of the Second World War, my father a major in the army, was in North Africa so my entire world was my grandfather, his family, his paintings, his beautiful garden, Wembley Stadium where he worked until 1948 and his Indian Room.

The whole teak square room was covered with oil paintings of Indian Gods. The ceiling had a round painting of the Sun God with lotus blossoms, driving his chariot of seven prancing horses each, a different colour of the rainbow surrounded by the Gods of the planets. I loved especially the Goddess of the Moon who had the prettiest little deer. She was my favorite. Wherever you stood in the room the Sun God looked at you. I would spend hours trying to work out why this was so. I still do not know.

The friezes showed festivals with huge elephants and lots of monkeys and dancing. I would dance along with them, copying their strange positions. Their skin was not like mine. Some were blue and some green. Some were rich like Agriculture, clothed in rich silk saris but some were very poor, and dressed only in a loin cloth.

Only these two beautiful oil paintings by students of the Bombay School of Art remain plus two small wooden teak panels and a magnificent carved table as the house was sold and the room destroyed. Only my grandfather, my cousin and I wanted to keep it. To his credit my cousin who became very rich tried to buy it only to find it had disappeared.

My aunts had to sell their huge house after my grandfather's death. They offered the teakroom to the Indian Government but in 1952 they had other priorities and art was not on the agenda. My father rescued two of the paintings, architecture and painting as the ladies are just so beautiful and he could not bare to part with them.

To my surprise and delight the long lost ceiling turned up in a fine art auction in Denmark. The auctioneers sent me a catelogue. It was just as I had described it and it was wonderful to see the rainbow coloured horses again. The cieling made around £100,000. Considering our house in Taplow sold for just £3,000 in 1954 that is some mark up! I am so happy it was not destroyed and I hope it gies the new owners, whoever they are, as much pleasure as it has me.

To see the ceiling in colour visit my blog at 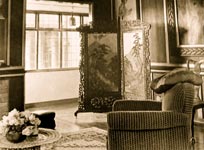 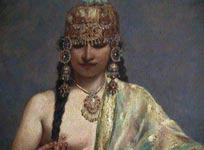 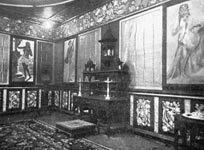 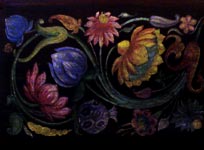 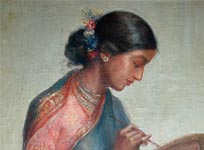 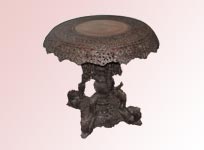 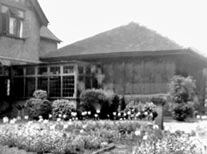 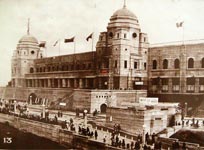